Bringing history back to life…

Retro is cool, right? Dig out those skin tight jeans from the back of the wardrobe; squeeze into your converse all stars, hide behind your hair, grab your original CND wrist wear and  whether you are 20 or 40, you wouldn’t look out of place on the street today, even with the natural grey highlights! The fashion and music industry all go in cycles, but the art of gaming has always moved forward: Bigger better eye melting graphics and heart exploding soundtracks are best, apparently. 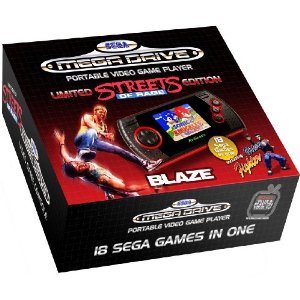 It now appears the gaming industry has finally realised that it’s not just the last 3 years that have bought us some great games, it’s the last 30 years! and they can still make some money from the old world. Occasionally someone will bless us and release a retro handheld collection, or a compilation for the current gen consoles, containing what they consider to be the best of the best, but in truth they normally containing 2 or 3 good games out of 20. Sony very quickly realised that PS2 backwards compatibility on the PS3 was a future money maker and quickly removed the option available on early releases of the console, although it can play original PS1 games.

The gaming world was very much alive and kicking long before Call of Duty came along, but we have little choice than to part with our cash on poorly chosen stock releases or via XBLA/PSN and Wii VC. It is a shame that it is so difficult to revive our childhood thumb twiddling days.

Or is it easier than you think?

You are very much limited in your options for retro gaming from official sources. If you want to do things legally, you might have to wait a very long time for that favoured game to finally see the light of day. But, as with many grey corners of the Interweb, a few taps in Google will instantly teleport you back to almost any childhood gaming experience that your young heart desires.

If you are a retro fan then there is a good chance you already have a few relics gathering dust in your loft. We all dream of converting the spare room in to a shrine containing these historical, working, playable, artefacts. Wouldn’t you love the ability to flick on an old Amiga A500 and play Chaos Engine? boot up the N64 and play Super Mario! bring some friends around to re-live the red-shell joys from the best ever version of Super Mario Kart, on the SNES, or lose yourself for hours in the Ocarina of Time.

Well, rather than a room full of antiques, it might already by possible that you can do all of the above, on the very machine you are sitting in front of, right now.

Say what you like about the legalities of emulation it is no longer possible to buy a SNES in your local Curry’s, but why can’t you just enjoy the beauty of these great games on some modern equipment? You could buy 2nd hand on eBay of course, but that money will not make it back to the creators. So by using an emulator on the PC, who are you depriving of revenue? If the game is on XBLA etc. then I’m sure you will buy it. If it isn’t available in any modern format, and you haven’t the room to dust off your legally owned original, then emulate it!

Type “game emulator” in to Google and you will get a gazillion return of hits. I won’t suggest which ones you click, as I could probably get in to trouble. It won’t take you long to find some very good sites anyway.

So where to start, I guess it depends on how old you are.  As my computing days go back as far as 1981, then the Sinclair ZX81 is a good a place as any. You can practise your BASIC programming skills with a windows based emulator, complete with slow keyboard entry but without the fabled ‘RAM wobble’. I have great memories writing games for this marvellous little machine, and it is fun to still do so, in Windows, 30 years later!

The emulation world really comes in to its own when you start moving on a year in history, to 1982 and the ZX Spectrum. This is when gaming really began to kick off. Money was flowing in to the industry, slowly but surely, and bedroom programmers began owning Ferrari’s, whilst still living with their parents. So this is where you start to stumble across a multitude of old skool games that still have a place in the modern world. Okay you probably won’t want to play them on your 42” HD TV, but how about the 4” screen of your mobile phone? The 9.7” screen of your iPad? You can now store that room full of antique equipment on your hard drive, or even carry it around in your pocket.

If you are still reading this then your interest in emulators has probably already taken you through the world of MAME, the Multiple Arcade Machine Emulator. Since 1997 this tiny piece of software has sparked a surge of heartbeats in the emulation community, and beyond. The aim is to catalogue the history of gaming under one roof. MAME is legal software, obviously it can be used by many to play reasonably modern games without physically owning/paying for them. Owning the Roms without the orignal game stuck in the loft, is where things get grey. Piracy will always plague the gaming industry, does MAME assist that practise? Nintendo and Sony have all tried to bury MAME, and failed. We generally all know the difference between right and wrong, as usual it is up to the individual to decide. As all games on MAME have to be more than 3 years old, it’s unlikely to be having much of an impact. MAME can run on a very basic PC, opening up the emulation world and placing these artistic pieces of history at your fingertips.

Such is the thirst for these old games that there are even some nice ways to carry them around in your pocket. The GP2X is a Linux based machine with an SD card slot suitable for loading many different types of emulation software. It is predomanantly a media player, the thinking mans PSP if you like, but it can actually do so much more. Taken from it’s current Wiki page, the GP2X is capable of emulating the following machines:-

Quite a phenomenal list, with approximately 5,000 ROMs available for the above machines, not a lot missing to treat the most hardened retroist. Prices for the GP2X are anything from £40 to £100, depending on the source, and many other Hand Held emulators are available. Some of the ROMs still need a lot of work. Some simply don’t like living outside of the PC environment, some are glitched graphically or bad audio. But the emu scene is very much alive and a lot of hard working dedicated folks are ploughing in thousands of man hours so that you can play Manic Miner wherever you go.

If you don’t want to invest in another handheld device because your pockets are already full, then perhaps you already own a DS or PSP? Many MAME style emulators for the PC have been modified to run on the current machines that are already sitting on shelves in many households. You might even like to tweak your Windows or Android mobile. I personally purchased a PSP slim in 2008, and I have about 30 games, but honestly it rarely sees the light of day. If I want to play a game for a couple of hours then I prefer the big screen to a little one. But I recently discovered, thanks @bobberella, that a simple soft-hack is available for the PSP and this will allow me to install emulators on my rather semi-redundant tech. 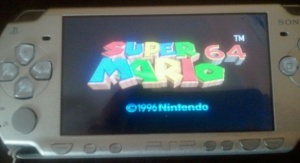 I’m not interested in piracy on the PSP, but I am interested in hacking it to play emulators. Again, Google is your friend. Within 2 minutes of a pointer, from @Bobberella, I was playing Super Mario 64 on my PSP. 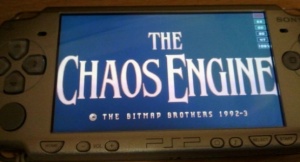 Half an hour later I was playing the Amiga version of Chaos Engine – Hell yes! I was in heaven! Do these things at your own risk, I won’t be responsible for you bricking your machine or landing a knock on the door from the FACT hit-squad.

If you are still a spotty little teenager who thought that the world of videogames began with CoD:MW, and are blinkered enough to not look beyond that particular gunsight, then emulating is probably not for you. Leave it to the grand uncles of gaming; the young inquisitive old skoolers, or mostly bordering 40 somethings, who miss the pre 256-bit world. History is written by the winners. To coin a modern phrase, retro is WINNING!

This site uses Akismet to reduce spam. Learn how your comment data is processed.